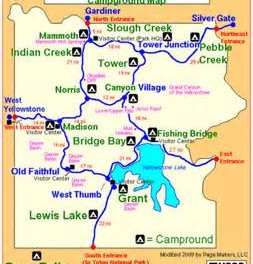 I just wanted to let you know that I’ll stick with this map from the APA Monitor thing and keep you updated. I also just wanted to remind you to stay alert and stay skeptical. There are multiple perspectives and ways of looking at things even in research and they have their pros and cons. Sometimes they give us useful information but they can also be misleading at times. For example, I could stand in the middle of the 3,472 square miles of Yellowstone National Park and say “geesh, almost no one lives here for a good chunk of the year” and a statistical method/computer could say “geesh, there are an average number of psychologists around that someone could access here.” Likewise for the entire state of Montana which has a huge land mass covering 56 counties but only 222 licensed psychologists. The map says there is average access to psychologists in the entire state of Montana. Apparently I only know elementary school math but if I assigned one licensed Montana psychologist to work in each county I could only get less than 4 per county and nothing close to the 34 per county average noted (and you and I both know many of them are more likely to be in cities). I’m interested to see how far APA’s analysis expects people to drive to see a psychologist; for example, it is possible that 34 centrally located psychologists might be expected to serve and incredibly disproportionate percentage of a states’ population which would sound ridiculous to anyone but a computer. The same methodology APA uses apparently can say there is a “Very high concentration” of psychologists in a county in New York State where there are actually zero psychologists. Good stuff.

I’ll keep you up to date when more information comes in but check out the clarifying emails I received so that you can have all the sides and not just my rant; I’ve copied and pasted the emails below for you:

It seems a bit awkward that the county-level map on pg 13 of the March Monitor makes it look like Yellowstone National Park, a very large area, has an “average” level of psychologists 😉

Thanks for contacting us and for your comments on our most recent Datapoint.

We will have a larger report focusing on the county-level distribution of licensed psychologists to be released on our website in March. Thanks for your interest in this Datapoint, and please stay tuned for the report!

Thank you again for your response an I’ll spare you all the various other references to parks I could make on the map like Death Valley in California or Baxter State Park in Maine (both of which appear to have a Very high concentration of psychologists on your map).

I had one other question. Could you help me understand the map in New York State? The entire state appears to be colored red for Very high concentration. I think that what I’m seeing here on this website is a geographic distribution of psychologists by county in NYS: http://www.op.nysed.gov/prof/psych/psychcounts.htm

Thanks for following up with us. The results came out differently because this map does not represent the exact number of licensed psychologists in each county, but rather presents the national pattern through hot spot analysis.

For more information on Getis-Ord statistic and hot spot analysis, please refer to the link: http://resources.esri.com/help/9.3/arcgisengine/java/gp_toolref/spatial_statistics_tools/how_hot_spot_analysis_colon_getis_ord_gi_star_spatial_statistics_works.htm

As I mentioned, this map was designed to present a national pattern instead of local, county-level patterns. In our report, however, we also included maps presenting the number of licensed psychologists as well as the number per capita, at the national level and specifically the state of New York, which will present more geographic detail. I will send you a link of the report once it is published.

Again, thank you for your interest in our Datapoint and the report! I hope this clarification helps.

Anyway, like I said I’ll keep you up to date.

P.S. I grew up in upstate NY so I’m familiar with the geography. Seneca County, NY is bordered on the east and west by Finger Lakes. Since there appears to be no psychologist in the county they’d probably have to drive quite a ways in an annoying fashion to find one (yet it is labeled Very high concentration).

Oh well, I suppose it would prove they were motivated if they had to  swim across a lake every week for their psychotherapy session (or more realistically drive far depending on where they are in the county) P.P.S. Psychologists– the Finger Lakes are beautiful wine country and you may wish to consider moving there despite their being a “Very high concentration” of psychologists (though apparently you’d be the only psychologist in Seneca County).

Another issue is that a large VA is nearby (Canandaigua) and I’m willing to bet you donuts that a large percentage of the nearby psychologists work there and a much smaller percentage are available for the general community.