Dr. Ken Pope has a nice website with citations related to Therapists’ Resources for Threats, Stalking, or Assaults by Patients so I’ll let you look there for citations of the data related to this. Dr. Pope noted that “almost one in every 5 psychologists reported having been physically attacked by at least one client” and also that “over 80% of the psychologists reported having been afraid that a client would attack them.”

I haven’t seen any lists of psychotherapists, psychologists, psychiatrists or other mental health professionals who were attacked and injured or killed, but it isn’t hard to find some with a quick Google search. For example:

Dr. Caroline Ekong: someone that she had had admitted involuntarily 3 years prior broke into her home and stabbed her to death. Her daughter was the one that called 911.

Dr. Kathryn Faughey was murdered in her office by a patient who brought a meat cleaver.

Dr. Wayne S. Fenton was found dead in his office after a patient beat him to death “with his fists.”

Dr. Mark Lawrence was killed by a patient in an apparent murder-suicide.

Therapist Diruhi Mattian was stabbed to death by a client who will spend 14 years in prison and perhaps get out and have another therapist someday.

Dr. James Trent was seriously wounded when someone he had performed a fitness-for-duty evaluation on came to his door and shot him.

Dr. Emmett Velten was killed at his home.

Western Psychiatric in Pittsburgh, PA has reported a number of attacks including on staff. I don’t intend to pick on them or single them out, they are just fresh in my mind because a colleague of mine did his training there and they had a shooting which left multiple people dead and injured.

Unfortunately, on the other side of the state near Philadelphia, PA there also was a shooting. A patient came in and shot and killed caseworker Theresa Hunt and shot a psychiatrist. The psychiatrist, Dr. Lee Silverman, had a concealed carry permit and returned fire, likely saving his own life and the lives of others in the hospital.

This isn’t a new concern. In 1994 an ousted airman killed his psychologist first before killing himself and others. Even back in the 80’s, according to Google, psychologist David Fox and his family were shot by a former patient who came to their home. In 1971, then 29 year old psychologist Dr. George William Chase was beaten to death at a hospital.

In case you’re the one person who hasn’t heard Haley Joel Osment say “I see dead people” in the movie The Sixth Sense starring Bruce Willis, I won’t spoil the ending for you.

If an unfortunate situation happens: if it comes down to having a gun or not having a gun, you may want to consider following in the footsteps of the psychiatrist in Philadelphia who at least had a chance of protecting himself.

If you do decide to get a handgun or shotgun (and even a concealed carry permit if desired), it is advisable to get some training, learn the rules of firearms safety and also practice at the range. It is also important to keep it locked up when it is not under your direct control. You can get a quick access safe with a biometric sensor that will open when you put your fingerprint on the scanner. I also personally don’t believe you need to carry a round in the chamber (unless you’re a police officer) since that will increase the chance of an accidental discharge, but you can have that debate with someone else if you disagree. 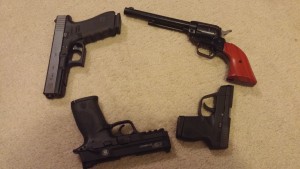 Even if you aren’t going to have a gun or pepper spray or something else for protection, you should routinely audit your security practices for both your home and office and run them by other people. For example, are you alone in the office? Are you able to call for help? Are you easily trapped in the office based on your furniture layout? Is your personal information easy to acquire? Remember situational awareness and don’t always be staring at your smart phone. Also remember that in many home invasions the person knocks on the door or rings the door bell and the person answering the door opens it and lets the perpetrators into the house. Don’t be paranoid, but be careful out there.

You can subscribe to get new Psychology.news posts by email.

Thanks, I promise the next post won’t be such a bummer 😉