Would you like to read a newer blog post related to the MMPI-3? Check this one out too: The FAA won’t be using the MMPI-3; should you?

I’m going to go on a bit of an amusing rant related to the upcoming third edition of the Minnesota Multiphasic Personality Inventory (MMPI-3) at the start of this post and then essentially change the topic to test security; please try to stay with me. I promise I won’t mention eBay. In relation to the MMPI-3 you may have read a recent blog post that I wrote “The release date for the MMPI-3 is expected to be in Fall 2020: A new MMPI by any other name wouldn’t smell as sweet, right?” If not feel free to do that, it won’t take long. In the post I mentioned controversy related to the future direction(s) of the MMPI-2 (vs MMPI-2-RF) and noted that MMPI-2-RF co-author Yossef Ben-Porath was involved in MMPI-3. Perhaps, as it would appear, the MMPI-3 will not be a natural extension of the popular MMPI-2. Anyway, my current amusement is semi-related to that past MMPI-3 post. I received an MMPI-3 marketing email today (2/13/2020) that I couldn’t help but laugh at. It noted “MMPI-3 is available this fall — be one of the first to receive training!” and was promoting the “MMPI® Workshops & 55th Annual Symposium” June 17–20, 2020 at the Renaissance Minneapolis Hotel, The Depot in Minneapolis, MN. I might go; it sounds interesting. However, here is the funny part: it included a header image of a person giving a talk and the file name of the header image was “hero.png” (I shoot you not). I suppose the criticism and mockery that probably deserves can only best be applied if I exercise fair use in relation to copyrights and give you two images of the “hero,” Yossef Ben-Porath. It is important because hero worship has no place in science. It is particularly relevant when that hero may become the primary person educating professionals on the merits of the test when he of course likely has conflicts of interest and will presumably stand to gain royalties on the test. So, yes the hero is a scientist but also remember that the hero is also a salesman. Scientist Heroes who are also salesmen (ex: an official representative of the test publisher) deserve more scrutiny and skepticism in terms of what they say. Anyway– back to the cartoon– here is the pic from Kent State University:

And here is the “hero.png” cartoonish speaker from the MMPI-3 advertising email which, notably, was not labeled as Dr. Ben-Porath but… come, on, really? 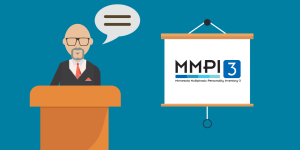 I know the subtitle of this post is “Want a psych test? Just Google It” and I will get off this tangent soon and write about test security, but first we can also use Google to get a picture of the state of the MMPI-2 and MMPI-2-RF lately. Here is a Google Trends graph comparing search interest in the MMPI-2 with the MMPI-2-RF:

–there is an embedded graph here; if you can’t see it try a different browser or to replicate it just go to Trends.Google.com; enter in MMPI-2, then click + Compare and add MMPI-2-RF, then click where it says past 12 months and change it to 2004 to present–

Search interest in the MMPI-2 (the blue line) has been steadily declining since 2004 and search interest in the MMPI-2-RF (the red line) appears to have never even existed relative to the MMPI-2. It is almost as if the double-flat-line “insert marketing spiel here” call out speaking balloon in the “hero.png” cartoon image above was like the near flat-line of the MMPI-2-RF google trend compared to the MMPI-2. So, I’m going to go ahead and assume that some fiscally-motivated sales decisions have to be made whether or not we’re talking about who wins the scientific arguments related to MMPI-2 vs MMPI-2-RF. Regardless, I’m not going to try and predict how the MMPI-3 will be received by the girthy bulk of our aging psychology workforce.

As a reminder, this is my blog and therefore I can heap scientific criticism or just criticism in general so yes, I’m going to go to some anecdotal evidence. Please be warned. I find that the Google Trends starting in 2004 is interesting. I was licensed as a psychologist just the year before in 2003; I started consulting on Social Security disability claims (among other things) the following year in 2004. I read thousands of pages of mental health records in a day in my job reviewing Social Security disability claims yet I rarely ever see that a personality test has been given (let alone the 567 question MMPI-2 or somewhat shorter MMPI-2-RF). When I started working on Social Security disability claims we could actually order MMPI-2’s for our CE exams (though we rarely did); now it is against SSA’s policy to order the MMPI-2 or similar tests (SSA won’t purchase personality tests or symptom validity tests). I do see personality tests still being given in forensic settings where reimbursement is higher and referral sources continue to ask for them (many referral sources like symptom validity tests in particular- a tangent I will avoid for this post). They may be given by VA employees for a disability-related C&P but they’re generally not given by third party contractors (ex: QTC, VES, LHI) doing VA disability exams for the VA outside of the VA.

How the MMPI-3 looks in the future is important given the reasons it is sometimes given. But anyway, here’s where the topic of this blog post shifts a bit to ethics and test security. The MMPI-2, MMPI-2-RF and soon MMPI-3 are given in high-stakes scenarios like pre-employment screening for police officers and fitness-for-duty examinations. Pilots take them for the FAA as part of their screening. So naturally the questions are all available online if you Google hard enough (not to the MMPI-3 yet as far as I know).  You can even find things like an MMPI-2 or MMPI-2-RF “Cheat sheet for appearing normal” when taking the test.

We know we have to keep test questions secure and we could each Google the APA ethics code to skim it and find the relevant sections (since who has that memorized?) but is that enough? Is it enough to think of this as just not publishing questions online or releasing them to attorneys? If that is how most of us think than we’re likely woefully unprepared for a technology arms race around test security where any examinee with opportunity and a cell phone can walk out with all the questions. It is easy for one examinee to decide they’re going to release the test online or even offer their own probably misguided coaching. I know of many situations where an examinee is put in a room alone with an MMPI or other test and they are subsequently not observed. Is this okay from a test security perspective in a world where everyone has a cell phone and with it the means to leave with copies of those materials? Similarly, the test publishers themselves (on platforms like Pariconnect and Q-global) allow examiners to have a link to a digital test administration emailed to someone where they would then presumably be able to record all the test questions they wanted to in an unsupervised environment. Does test security ethics/ best practices need to be updated to include no longer leaving someone alone in the office while you drink coffee in another room, play Space Invaders (or see other patients)?

Clearly in some institutions basic education about test security isn’t really getting through to students. For example, if you’re a professor giving students/ trainees unfettered access to IQ tests- it is on you and your institution if the contents of those IQ tests get introduced in to the wild (and yes- there are high stakes situations where people are looking to be able to coach their child to gifted-level performance on the IQ test). How nice for them that your graduate student just gave them all the test questions. Hey busy professor, I get that you don’t want to observe your trainee administering the IQ and want them to turn in a video- but if your students start posting them as public on YouTube that is because of your failure to instill in them a recognition of how bad of an ethical violation that is. So I’m not going to call out the names of the multiple (apparently) graduate students who have posted WAIS-IV and  WISC-V administrations to YouTube. However— graduate students— stop publicly uploading test questions and answers to YouTube. I will call out at least two schools. The involvement of these schools is unconfirmed, speculative  and based only on a Google search for the course numbers in associated YouTube accounts… but Emporia State University and the Chicago School of Professional Psychology (at least) should each start checking to see if their students have uploaded entire WISC-V and/or WAIS-IV administrations to YouTube. I’ve left YouTube comments on these and others where I couldn’t guess their school asking them to make the videos unlisted or private. It would be nice if my blog readers would occasionally go on YouTube (owned by Google), search videos like this out, and politely troll the graduate students by commenting on their videos with education. Here is a nice FAQ from APA “Maintaining Test Security in the Age of Technology” that you could provide (see, I’m not always critical). Who knows, as a result you might some day have a cartoon likeness of you sent by a test publisher with the file name “hero.png.”

And yes, in this blog post I used the abbreviations of not-yet-released tests: MMPI-3, WAIS-V and WISC-VI in a shameless, clickbaity way… but if it got some graduate student to read this and smack their forehead and think- durh, right, let’s not make the tests publicly available on YouTube then it was worth it; you’re shirt forkin right it was worth it.

BTW, if you want to subscribe (via Google’s Feedburner) to get an email the next time I’m cheesed off about something psych related and write a blog post you can do that here.

If  you want a list of hundreds of referral sources for psychologists and/or physicians you can find that here.

P.S. Fun update… Dr. Ben-Porath is now using it for his twitter profile so there is that… https://twitter.com/ybenpora 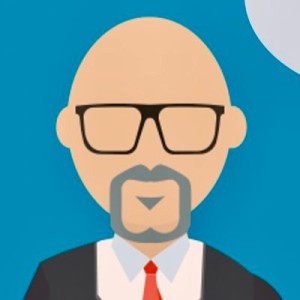